our Region and Beyond

as resources of cultural significance

Thank you for your support!

Get Involved – Here’s How

If you’ve hiked or biked our wonderful Ashokan Rail Trail (ART) you’ve likely noticed a number of informative signs about the geography and history of the trail and surrounding lands. Unfortunately there’s a sign that’s missing: one devoted to the Native American tribes who lived and thrived in the area. This is where you come in.

Overlook Mountain Center (OMC) is partnering with consultants from regional Native American tribes, archeaologists and the Ulster County Planning Department, in an effort to have an additional interpretive sign installed along the Ashokan Rail Trail (ART) that would recognize and honor the Native American civilization that existed in the Esopus Valley prior to European settlement and the New York City Ashokan Reservoir construction project.

Currently, ten interpretive signs exist along the ART, documenting the history of the Ashokan Reservoir project, which took place in the early part of the 20th century. The signs focus mostly on the massive construction effort which took place, the historic towns and people who were displaced by the project, the environmental impact and subsequent restoration efforts.Two of the ten signs have single sentences which reference Native American presence in the valley,  but no single sign is dedicated to their 10,000 year history in the area.  Electronic versions of  the signs can be viewed here: http://ashokanrailtrail.com/?page_id=155.

Ulster County Planning Department along with an historical archaeology firm fully support this effort, but currently has no budget for the additional signage.  The cost to research, write, design, fabricate and install the sign is $6000, The Woodstock-based nonprofit Overlook Mountain Center has provided seed money  to retain the archaeological firm that is working with the county to determine a location and the sign’s content. But it’s only a start. We need your help in raising $6000 to make the sign happen.

We appreciate your participation in this important project to recognize of Native Americans and acknowledge what they have lost beneath the waters of the Ashokan Reservoir and surrounding lands.

Please feel free to reach out to us with any questions or to discuss more of the project details.

Thank you with kind regards,

Since 2013 Overlook Mountain Center (OMC) has been creating and conducting educational, cultural and community building programming celebrating ceremonial stone landscapes (CSL) in our region, as exemplified by the Lewis Hollow Site on Overlook Mountain in Woodstock, NY. We now embark on a new phase of program development,

Overlook Mountain Center, partnering with tribal members of the United Southern and Eastern Tribes (USET), including THPOs and tribal youth of the Narragansett Tribe of Rhode Island, Ramapough Munsee Lunaape and St. Regis Mohawk of New York, will develop and conduct programming that teaches understanding of these special, spiritual places, in their proper cultural context and with the respect they deserve as priceless resources of cultural significance for all people.

We hope to support this endeavor through Memorandum of Understandings (MOUs) established between United Southern and Eastern Tribes (USET) tribal participants and local authorities, i.e. town boards, historical societies, historic commissions, county planners and state regulators, such as the DEC and DEP.

Bringing some of these sites into public consciousness for the first time will build bridges of understanding and good will between peoples that have had strained, mistrustful relationships for far too long. We hope that through this effort that can now begin to change.

Please consider joining our cause and volunteering. We seek creative, resourceful, friendly, open minded people to help us fulfill our mission.

Resources and links that share a common mission with OMC:

Purchase items related to the Overlook Mountain Center mission to educate about the environment, diverse culture and the concept of community

OMC Chairperson Glenn Kreisberg has recently published a book about his 10 year quest to understand the lithic constructions found in the backwoods of the northeast, including the Lewis Hollow site on Overlook Mountain. When you purchase a copy of Spirits in Stone from the OMC website, you receive a 10% discount PLUS 10% of the proceeds are donated to Overlook Mountain Center.

My new book, Spirits in Stone, will be out April 10th, from Bear & Co. In it I document over a decade of research into man-made stone constructions in the backwoods of the northeast, with a f 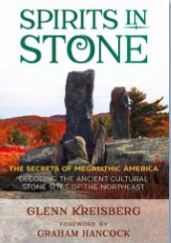 ocus on the Catskill and Shawangunk mountains of New York. I examine the potential origins and purposes for a myriad of different types of old stone structures found on the land, including walls, cairns, perched boulders, effigies and more. I also examine important sites around the world for insights into ancient megalithic culture. In the northeast U.S., as elsewhere, the patterns revealed through the eye of landscape archaeology and archaeoastronomy speak to the sophisticated belief system of an ancient population that understood the complex movements of the night sky and integrated those beliefs into their lives and world view. I believe they accomplished this through the cultural practice of celestial observation, landscape manipulation and monument construction, as well their travels and contacts with peoples from other regions and parts of the world. This is controversial information, as generally for our region, this is not accepted to be true by conventional historians. I hope this book helps change that view.