The Devil’s Tombstone, an impressive monolith off Rt. 214 between Phoenicia and Hunter, New York reminds us to keep an open mind to the prospect of archeoastronomy and landscape archaeology in our region. The glacial erratic stand staunchly upright, protruding vertically from the ground like a giant gravestone. Geologists tell us it was placed this way, dropped out of a glacier as it was receding after the last glacial maximum some 20,000 years ago. I happen to believe other factors were at play since then, to get it to where we see it today. I’ll call it the human factor; that humans played some part in the movement and placement of the Devils Tombstone monument. If so, then perhaps the Devils Tombstone should be seen not only as an object of geological interest but one of cultural significance as well.

But first, a quick lesson on the Hammonasset Line, identified by some researchers as a winter solstice sunrise, summer solstice sunset alignment between the Devil’s Tombstone and Council Rock, at Fort Pond on eastern Long Island, used for endless generations as a meeting spot of the Montauk Tribe.All along this “line”, as it extends from Long Island, across Connecticut and into our region of NY, are found numerous Manitou achsinal (Munsee) or “spirit stones”, man made stone constructions considered scared by the indigenous tribes of the northeast. That the alignment between these two well know stone monuments runs on a bearing from 137 deg. (mag.) in the southeast, to 317 deg. (mag.)northwest, is objectively determined with protractor, map and ruler. That these azimuths or points on the horizon, match closely to where the sun rises and sets on the longest and shortest day of the year (the solstices), is also simply a matter of math. If that is a matter of coincidence or intention, is at the heart of what many find so fascinating about this mystery. 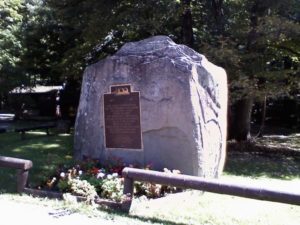 Now back to the Devil’s Tombstone. Is there evidence suggested in the name itself, that ancient indigenous people in our region help in erecting the Devil’s Tombstone? Other sites in our region have Devil in their names. Examples include Devil’s Acre, Devil’s Kitchen, the Devil’s Dance Chamber (or Danskammer, in Dutch). Many of these names were given by the first Europeans in the region, theDutch who were among the first to settle Catskills. To the Dutch Calvinists, the Native American tribes that inhabited our region were Devil Worshipers, thus the names of places Indians carried out their religious ceremonies were attached the Devil’s name. This is best documented by the crew of Henry Hudson’s Halfmoon, on Sept. 9th1609, on Hudson’s 3rd voyage of discovery.  Upon seeing a large native ceremony taking place on a prominent point of land on the western shore of the river they were sailing up, they gave it the name, still used till this day,Danskammer Pointor the Devil’s Dance Chamber, found north of Newburgh on the Hudson River (you can find it on Google Maps). It turns out that Danskammer Point has an important relationship with the mouth of the Wappinger’s Creek, across the river, on a solstice sunrise/sunset alignment, not unlike the situation with the Hammonasset Line and the relationship between Devil’s Tombstone and Council Rock on Long Island. Coincidence?

When we find patterns we were not looking for, it calls for attention.  So, if the claim is made that the Devil’s Tombstone has a purposeful orientation, related to the solstices, are there other stones in its vicinity that also possess those or similar features? It turns out there are two, both within 1 mile of the Devils’ Tombstone.  The first in located on the path from Notch Lake in Stony Clove, heading up Plateau Mountain, on the DEC trail. About ¾ ways to the north western summit, sits a medium size, unassuming boulder alongside the trail known as Plateau Mtn. Calendar Stone I, first reported in a NEARA Journal article by Gary Jaycox in 1981. The second, Plateau Mtn. Calendar Stone II, located across the summit ridge to the east, and oriented to the winter solstice sunrise, is replete with inscriptions and an old glyph related to the Sun.

Two “Calendar Stones” have been identified and documented on Plateau Mountain, above Stony Clove and the Devils Tombstone.Both stones and their locations lay on or near what’s known as the Hammonasset Line. That these stones are found in the vicinity of Devil’s Tombstone, suggests a connection between the monuments and a consistent pattern of evidence that supports the ideathey are all important resources of cultural significance, connecting earth with sky from a time long past. If so, the implications are fascinating to contemplate. 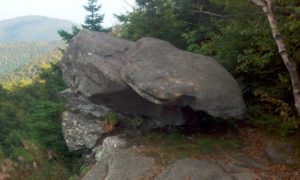 As absurd as it may sound, a comparison of the Lewis Hollow Site on Overlook Mountain in upstate New York and the temple complex of Ankor Wat in the jungles of Cambodia reveal some remarkable parallels. These parallels illustrate how a similar, sophisticated “worldview” may have indeed been just that; a universal belief system and practice, shared by ancient cultures around the world and across the globe.  Do we see evidence of this in the unlikely commonalities found between these two sites?

It has always been a confounding mystery to me how both the stone constructions at the Lewis Hollow site on Overlook Mountain and the Ankor Wat stone temples in the jungles of Cambodia both seem to mirror the northern circumpolar constellation Draco. This was shown to be true in my research on the Lewis Hollow site in Spirits in Stone and in Graham Hancock’s book Heavens Mirror.  That connection was of course quite unexpected, as was the discovery of the Draco petroform on Overlook Mountain, in the first place.

It wasn’t until very recently that I began to realize the connection did not end there.  In the work of David Johnson at the Lewis Hollow site, it was shown through his dowsing surveys of the subsurface groundwater flow, that the stone constructions on the surface, the cairns, “great” cairns and serpent effigy walls were also marking and mapping the subsurface water features, where the ground water flowed more easily through the fractured bedrock to feed springs below.  Those year round springs, along with the intermittent surface flow of rainwater in the steep hollow, feed small local brooks and streams that flow into larger creeks and rivers. But perhaps more was going on than just mapping the locations of the important headwater sources. Maybe there was more intention and purpose involved.

Recent studies have revealed how the ancient Kumar culture in Cambodia used ground water to both sure up the foundations of their massive temples and provide irrigation for their agriculture. They built large moats around the perimeter of their temples which would fill in the rainy season and slowly drain into the surrounding ground to help solidify the sandy soil beneath the temples and create cement-like foundations to prevent the structures from crumbling.  Also, while these moats were slowly draining, during the dry season, their stored water was diverted into distribution canals to flood nearby fields to grow rice, which requires two inches of standing water.

At the Lewis Hollow site we also see how understanding and controlling the groundwater was part of the plan, but why?  Is it possible there was a ceremonial and perhaps agricultural component to the manipulation of the landscape to map the subsurface hydrologic features in Lewis Hollow? It’s interesting to note the location of the Zena cornfields, a known Native American agricultural site in very close proximity to Lewis Hollow. In fact, if you draw a straight line along the axis of the hollow, out of the mountain, it leads directly from Lewis Hollow to the Zena corn fields located directly below the hollow, on the landscape. As water likes to follow the path of least resistance, it’s reasonable to see how the ground and surface water gathered and collected up in the Lewis Hollow springs and streams would seep and flow downward and end up feeding the Sawkill River, which runs parallel to the Zena cornfield to the west, or recharging the aquifer beneath the ancient cornfield on the valley floor.

As the two old spring houses located up in Lewis Hollow attest, people have always sought to utilize the waters coming off Overlook Mountain into Lewis Hollow. Remnants of old homeade piping systems still exist, leading from those spring houses, transporting water to properties located in the lower parts of the hollow. Could the ancient Native American population of the area have wanted to help direct that water to their agricultural endeavors in the fields further below? Could the field itself have been located on the valley floor directly beneath the mouth of hollow in the mountain, where the water was concentrated and gathered? These are questions worth asking and understanding.

Now, I’m not saying ancient Cambodians visited North America. The Ankor Wat temples date from about 1000 years ago, and some of the Catskill Mountain cairn complexes are speculated to be at least 3000 years old, and obviously more primitive expressions than the Kumar temples. Given that, when applying the concepts of cultural diffusion and early transoceanic peopling of the continents, over great time and distance, who’s to say, and one might wonder who influenced who?

Nevertheless, by identifying the similarities between the Lewis Hollow and Ankor Wat sites, we can ask if the ancient Kumar and the ancient Native Americans shared a similar three dimensional world view, where sacred water (from the underworld) linked with their stone constructions on the earth’s surface, (the world of the living), and which in turn relate to the celestial or supernatural world above and specifically in this instance, the constellation Draco in the night sky?  One must believe there’s more to the story than mere coincidence; a representation that may reflect an ancient global view of our human place in the Universe.

Is there a relationship between the location of the Native American corn field in Zena and the water source in Lewis Hollow on Overlook Mountain? 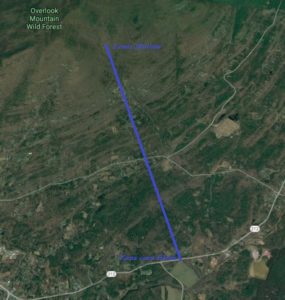 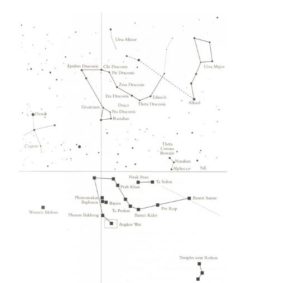 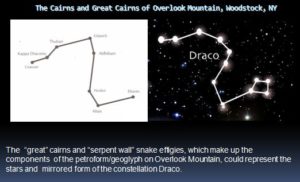 Glenn Kreisberg is an author, outdoor guide, and radio engineer, who researches archeoastronomy and landscape archaeology in the Hudson Valley and Catskill Mountains of New York. His books include Mysteries of the Ancient Past, Lost Knowledge of the Ancients, and Spirits in Stone. He served two terms as vice president of the New England Antiquities Research Association (NEARA) and studied archeoastronomy at SUNY and archaeoacoustics on Malta. He is co-founder of the non-profit Overlook Mountain Center (www.overlookmountain.org) in Woodstock, NY, where he lives with his wife and two teenage children, a dog, three cats, a bird, a lizard and a fish.